The movement launched by Sushil Reddy, a young Indian engineer from IIT Bombay, is touring in France and North America to raise awareness about solar energy and clean transportation using a solar powered e-bike. 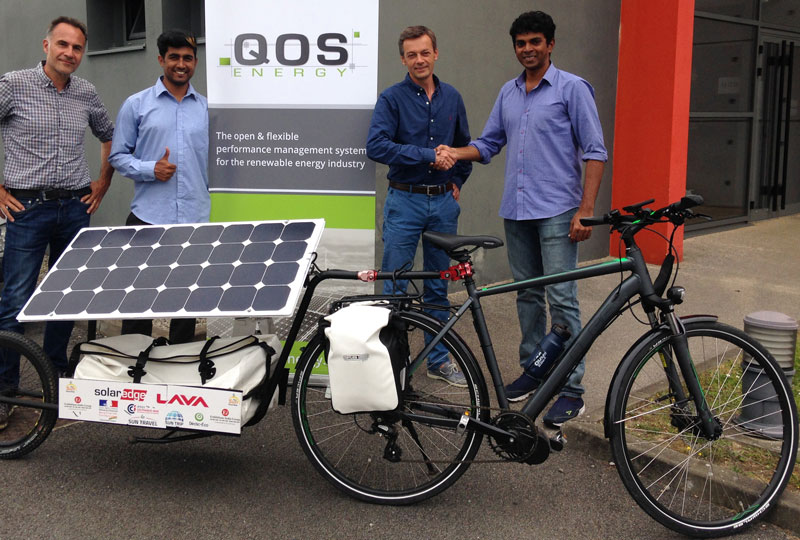 Sushil had recognised that there is a need to empower people with solar energy and encourage them to use more of this abundant renewable energy resource. In the summer of 2016, Sushil Reddy, undertook a unique and inventive initiative to talk to the people across India about solar energy by touring on a solar powered electric bicycle. With a team comprising of Krunal Tailor, Himanshu Singh and Rajendra Bhaskar, they went on a journey across North West India. They passsed through 9 states/union territories and covered over 7500 kilometres while interacting with people in the cities, villages and towns on the route. Sushil Reddy earned a recognition in the Guinness and Limca Book of World Records for the longest journey on a solar powered electric bicycle.

“We plan to take this movement to reach out to as many people as we can and educate people about solar energy, clean transportation and sustainability. ”

Sushil Reddy and Rajendra Bhaskar are travelling around France in June 2017 as a part of The SunPedal Ride – France edition. They are interacting with people throughout the journey while encouraging people to move towards renewable energy and highlighting the solar energy revolution in India. They have also successfully organised conferences in leading French business and engineering schools such as HEC, Insead and INSA Lyon.

Sushil is also organising a ride around California, USA in September. He will present his project and raise awareness about solar energy and clean transportation during the Solar Power International exhibition, Las Vegas, September 10-13.

About the Sun Pedal Ride

The SunPedal Ride is a movement dedicated to creating awareness about solar energy and clean transportation. The founder of this cause is Sushil Reddy, an IIT Bombay alumnus (Energy Department, 2013 batch).

and talk about optimizing your renewable assets

One step to go

Please fill in your details below and we will email you the case study shortly.

Any cookies that may not be particularly necessary for the website to function and is used specifically to collect user personal data via analytics, ads, other embedded contents are termed as non-necessary cookies. It is mandatory to procure user consent prior to running these cookies on your website.